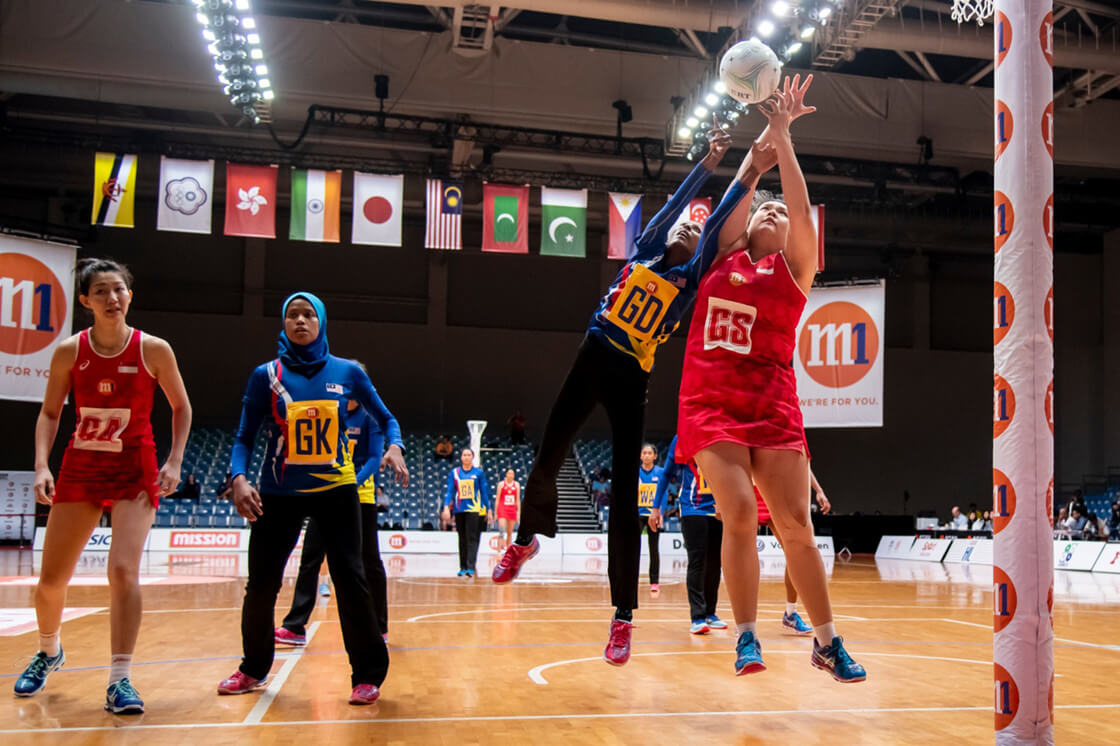 Singapore beats Malaysia by a point in the 2018 Asian Championships to make it to the finals. Photo: Netball Singapore

Though traditionally viewed as a female sport, the popularity of netball has been growing in Singapore amongst both men and women. According to the Netball Association of Singapore, there were some 80,000 competitive and leisure players of the sport in Singapore in 2011. Today, growing numbers of are participating in mixed teams.

The history of netball in Singapore stretches back over fifty years, with the country playing host to the second Netball World Cup in 1967 and competing in the tournament on multiple occasions. The team has met with success at the regional level, having placed on the podium at every Asian Netball Championship since the first competition in 1985.

On the global level, Singapore’s netball team has seen less success. At last month’s Netball World Cup, the team lost each of their matches, including a crushing 89-21 defeat to eventual champions New Zealand. The young team did their best but were outmatched by their vastly more experienced and physically larger opponents. With this humbling experience under their belt, the team is looking forward to a better showing at the M1 Nations Cup in October and the 2019 SEA Games in the Philippines at the end of the year.

Netball – What are the costs?

The growing popularity of the sport has also been accompanied by an increase in injuries caused by the sport. As a person who grew up playing netball, I am keenly aware of the injuries that can affect players. Professional players are not exempt from such injuries, with Malawi’s star player Mwai Kumwenda missing the Netball World Cup after rupturing her ACL in a poor landing and Britain’s Layla Guscoth suffering from a tournament ending Achilles rupture over the first weekend of games.

I myself suffered from a serious injury in my youth. This was the result of a high leap and a poor landing which caused extreme rolling of my right ankle. I unfortunately suffered damage to the major ligaments of my outer ankle and even caused a minor fracture of the tip of my fibula bone. This put me out of action for over 6 weeks and continued, over the next few years, to cause me issues as I had limited motion and poor stability due to the laxity within my ankle. Today, wearing customised foot orthoses has prevented the reoccurrence of any ankle sprains by providing my foot with a stable base and support where it is needed.

As a result of my experience, I have developed a keen understanding of a player’s needs to both recover from and prevent injuries while playing netball. Netballers are more likely than most to sustain injuries around the knees and ankles. This is due to the type of movement involved in this sport compared to others. For example, running utilizes a unidirectional motion, so our joints are used in a repetitive forward action. Unlike running on the track, netball encompasses short, sharp sideway movements, pivoting of the foot and ankle and jumping. This twisting and rolling of the foot coupled with fast, high impact landings can take a toll on our ankle joints and the surrounding structures, leading to pain and injury.

Help, I have an injury!

If you experience ankle pain after a game of netball, getting a proper diagnosis is imperative as the cause for this pain ranges from tendon injuries to nerve compression or even gout. However, the most common cause of pain in this region is an ankle sprain.

Ankle sprains involve ligaments (strong, fibrous tissues) that surround the ankle joint which are necessary for stabilization and alignment. The medial (inner) ankle has 4 ligaments which together make up the ‘deltoid’ ligament. The lateral (outer) ankle contains 3 ligaments, and these are more frequently damaged due to the rolling out motion of the foot during physical activities, particularly during sports like netball.

Classic symptoms such as swelling, bruising, redness or stiffness are normally seen but can present with varying degrees of damage. However, once an injury has occurred, the ligament becomes weakened and is consequently more prone to future injury. If pain persists over a prolonged period, the ankle has severe swelling, or you are having trouble putting weight on that foot, you are strongly advised to go to a clinic immediately. After examining and scanning the area of injury, we can devise an appropriate treatment plan that incorporates a range of therapies to hasten the recovery process. Podiatrists can also aid in the prevention of injury reoccurrence (chronic ankle sprains) by providing support in the form of medical insoles.

How can I prevent injuries during my games?

Most players perform a basic warm up and stretch as a team before the start of their match and a cool down and stretch afterwards. This is a necessary part of avoiding injury when playing any sport and should not be overlooked. It’s important to note that stretching is not meant to replace warming up activities, but complement them instead. Warming up our internal structures also improves your game by ensuring your muscles are relaxed and ready. By stretching before and after physical activity, you reduce the risk of overloading and developing overstretch injuries.

Having stamina and being agile are key components of a good netball player but what about stabilising your feet? What most people do not apprehend is that the type of footwear you choose can influence your abilities during your game. Having adequate support that aids this variety of movements may not be found using good footwear alone. The use of medial insoles prescribed by a podiatrist can alleviate musculoskeletal stress, align the lower limb in its best functional position, and help to reduce ankle, knee, hip, and back pain as well as any reoccurrences of past injuries.

Chantelle Crossland is a Singapore-based podiatrist practicing at East Coast Podiatry’s Kembangan location. Aside from her experience with sports related injuries, particularly of the ankle, Chantelle also focuses much of her clinical work on children with musculoskeletal or sports-related conditions.