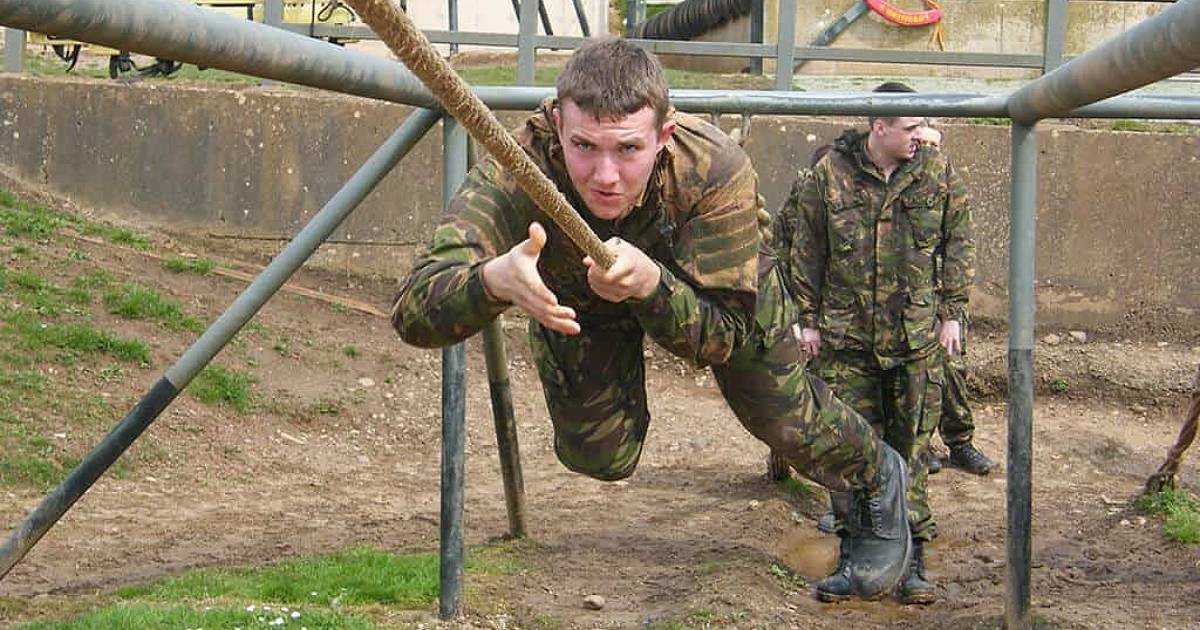 Meet Jamie, a 24-year-old British pole dancer, martial arts enthusiast, soldier. Jamie is also a patient at East Coast Podiatry. And yes, he has been asked all the questions that are running through your head. But don’t worry, we will ask them for you too.

You must get this question a lot. Why pole dancing?

I started in my second year of university. I was at the open house recruiting first year students to join the karate and judo clubs, two of the martial arts that I do, when two ladies from the pole dancing club came up to speak to the people in the next booth.

As there were no visitors, I went over to listen. I was very surprised as it was totally different from what I had expected. They said it was one of the fastest growing sports in the world and it sounded incredibly interesting so I decided to give it a try.

So after the talk, I went over to the club’s booth to sign up. There was a bit of a commotion [Laughs]. The ladies couldn’t believe that a guy wanted to join pole dancing.

What were your first impressions?

At the first meeting, I was the only guy among a hundred and fifty ladies. I didn’t expect that. [laughs]

I was very surprised and absolutely blown away by the performance put up by the instructors on that first day. I thought to myself, I would be more than happy if I could ever do even half of it. Although my first time up on a pole didn’t work out too well, I couldn’t wait to get up and try it again. 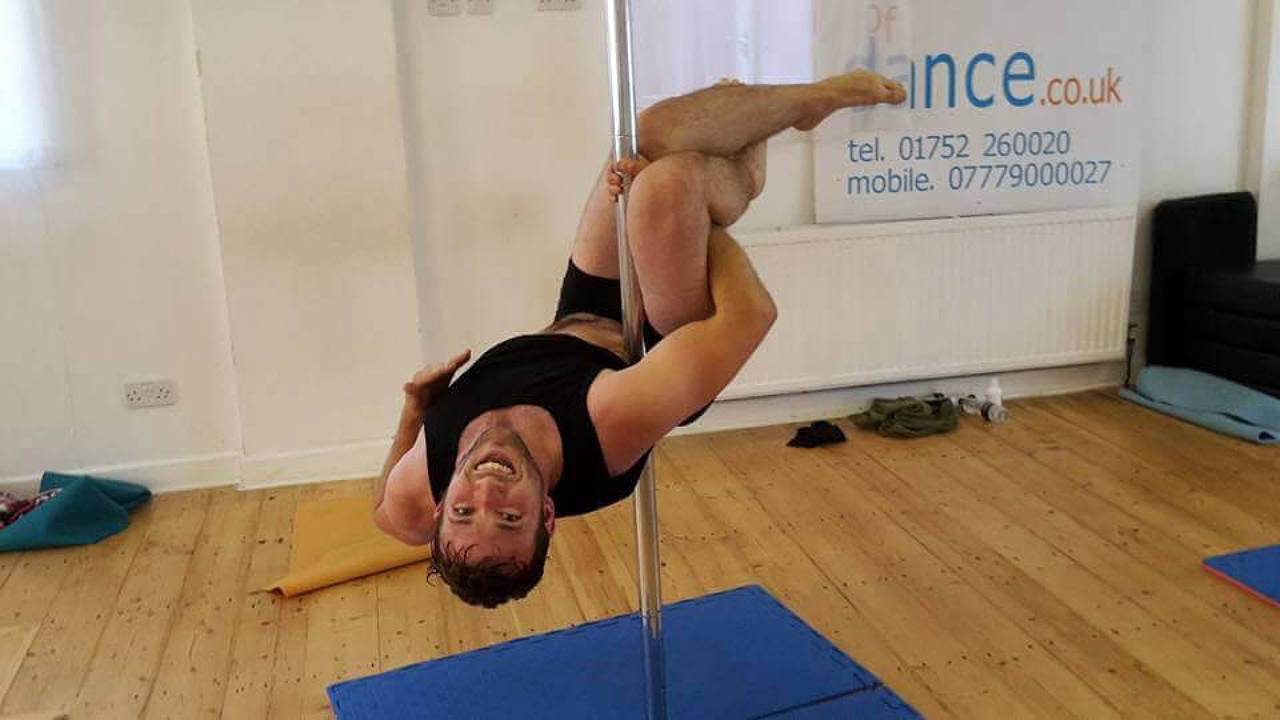 Being a gentleman pole dancer, you must face some unpleasant reactions at times.

I wouldn’t call them unpleasant, just ignorant. I have had people make comments about my masculinity or sexual orientation, but when I point out that I’m surrounded by beautiful attractive women all the time, they usually wind up looking envious, at least for the guys [Smiles], and walking away.

However, such attitudes are one of the reasons why there are so few gentleman pole dancers.

How often do you run into other gentleman pole dancers?

I can’t give you exact numbers, but in my experience, it’s probably 1 in a hundred or less.

Some men think it’s emasculating, so even if they are interested, they won’t join because they are afraid of the reaction they might get from others. A lot of the newer guys who get into the sport join with their partners.

I’m glad to say that we are seeing more men join the sport in the last year or two though. I hope this continues.

Speaking of reactions, what was the response from your family?

[Laughs] Mother was shocked, but supportive.

I’m the eldest amongst my siblings. The rest are quite young so they don’t understand the stereotypes behind pole dancing, but I’m glad that their first exposure was through me. It’s an athletic sport, it’s tough and it’s challenging. I sincerely hope that my experiences and performances will help them to see beyond stereotypes and hopefully this will encourage them to be more open-minded.

People have this impression of pole dancing. That it’s sexy, risqué, or sleazy, but most of the dancers are just there to practice athleticism. I think that’s an important detail for non-dancers to know.

Would you say that pole dancing has also helped you with martial arts?

Absolutely. Pole dancing isn’t only about strength. It is also about athleticism and flexibility. All of these are crucial to being a good practitioner of martial arts.

Overall, pole dancing has helped me to be much more flexible and strengthen different parts of my body. It has also made me more confident. This has allowed me to deal with difficult situations or encouraged me to pull off moves, in both pole dancing and martial arts, which I would have thought impossible for me in the past. This confidence has also been helpful in my career in the military. 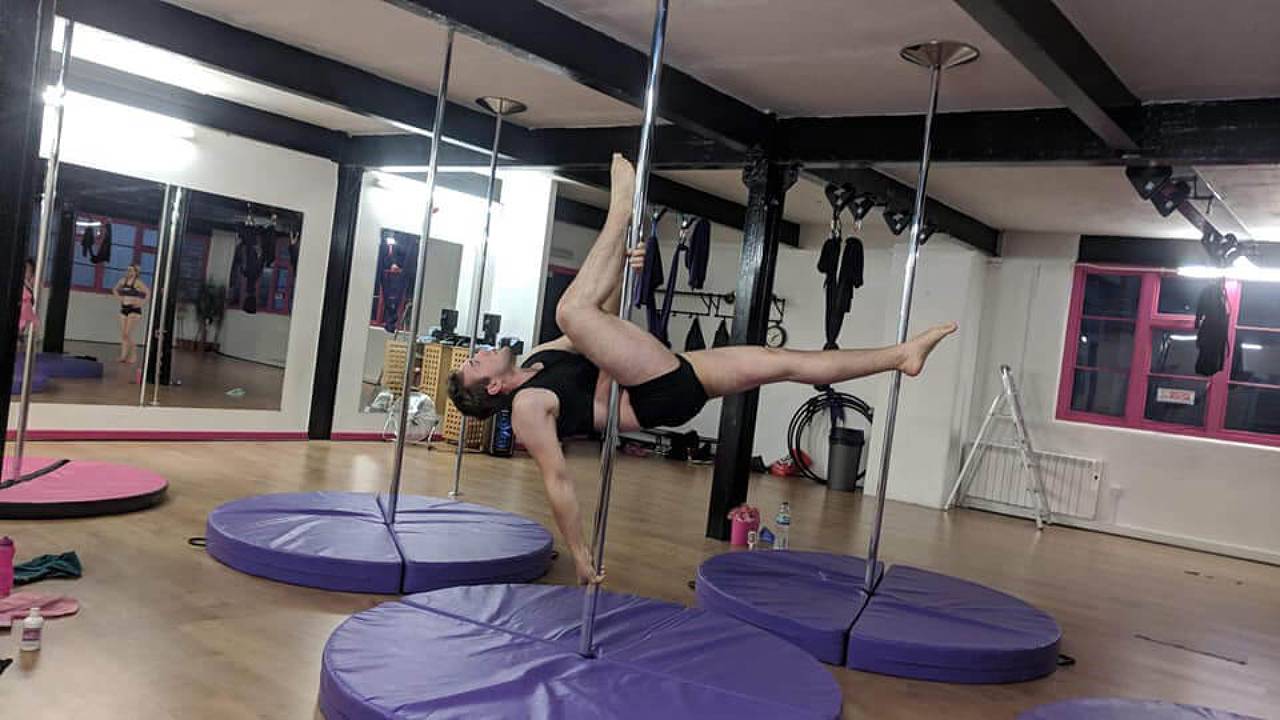 So what do your fellow soldiers think of your pole dancing?

I’m sure you can imagine what many of them say. [Smiles] But mostly, they’re just surprised.

Whenever I run into someone new who says something mean-spirited about myself or the sport, there’s always been somebody around who reminded them that I also practice multiple martial arts.

So, like the ladies who impressed me at the school fair, I share about my experiences with pole dancing and how it has helped me improve my strength, flexibility, and confidence, making me a better athlete and soldier.

Have you ever performed in front of others?

The first time I tried it, I was out for a night with some of my classmates. A few of them started dancing and one of them invited me to go up. I certainly couldn’t say no. It was exhilarating. Performing at an impromptu live performance is always a thrill and I don’t think anyone expected to see a gentleman dancer on the poles that night! [Laughs]

Today, if I see a pole available at a club or bar, I might just go up on it if I’m in the mood. It’s given me the confidence to simply stand up and give it a try no matter where I am. It’s just for fun. In fact, I often feel more comfortable dancing on a pole than on the dance floor these days.

You mentioned practicing several martial arts earlier. What are these?

I’m a black belt in both Judo and Karate, and I’m currently working towards a black belt in Jujitsu. I’ve been more careful and taking it more slowly slow as I’m still recovering from a motor accident a year ago. It doesn’t help that my knees have been experiencing pain due to years of overuse as I’ve been active in various sports for a very long time. 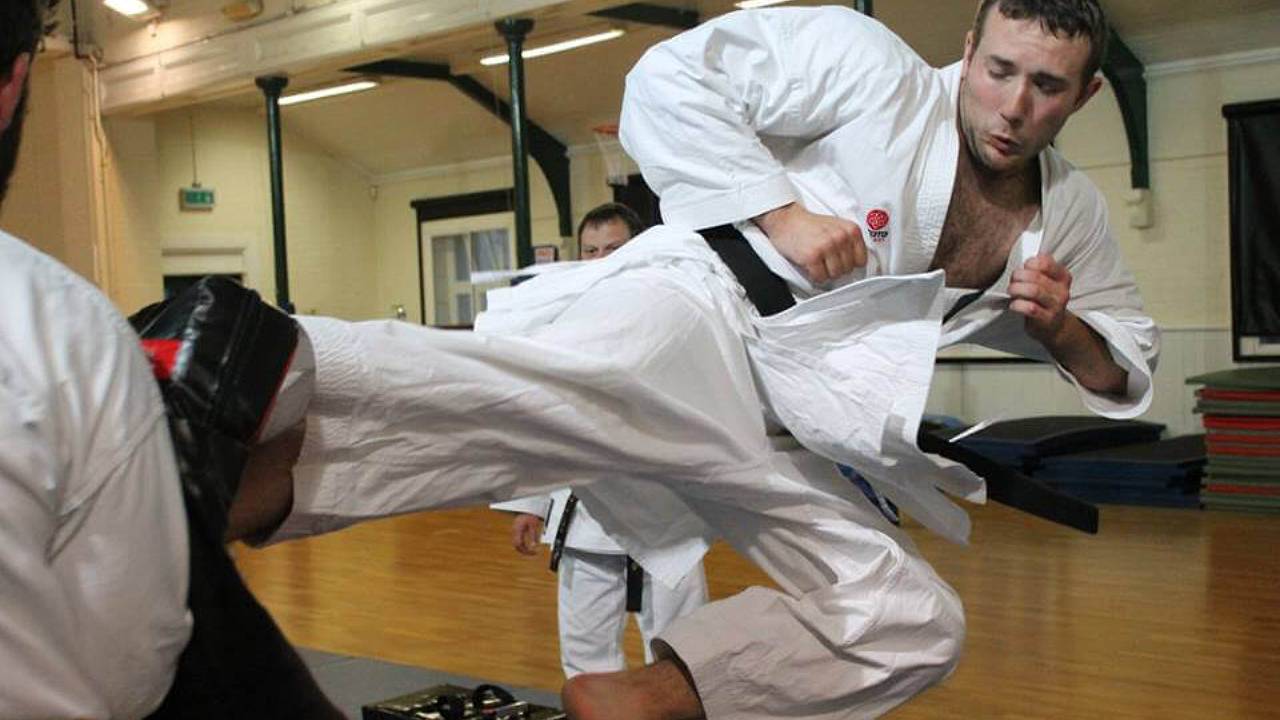 How have these injuries affected you?

After the crash, I had some leftover scar tissue in my ankles which has continued to cause stiffness and impede my movement. Warm-ups are especially tough, and it has also affected my performance in sports. For example, switching between stances in the various martial arts or changing poses during pole dancing can be tricky. It has slowed me down and sometimes prevents me from assuming the position or performing the move properly.

My patella is also misaligned after years of rugby and football, so my knees can hurt quite badly at times. All of these have made me increasingly cautious about how I do my sports. 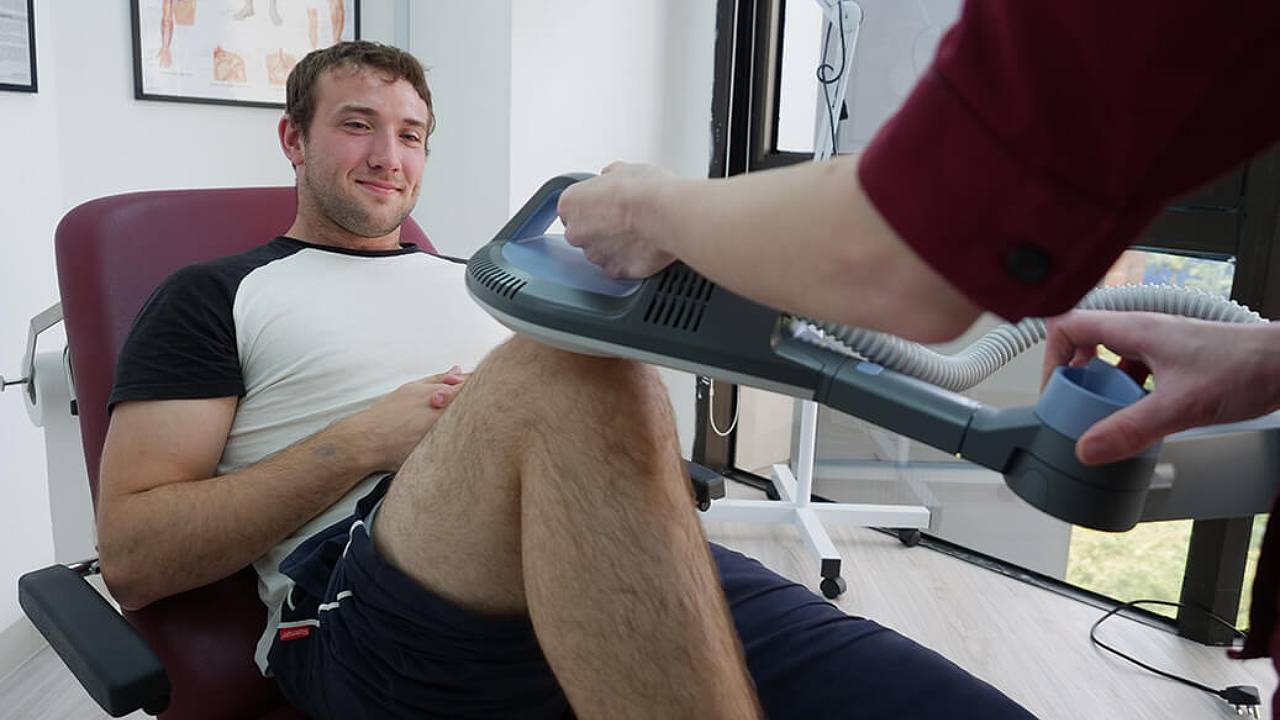 What sort of treatments have you undergone at East Coast Podiatry so far?

At East Coast Podiatry, I am undergoing a high intensity treatment regime to help me recover more quickly. So far, I have had several sessions of shockwave therapy as well as something called SIS. The podiatrists have tried explaining it to me, but all I get is that it uses electromagnetic fields to help my body heal. I can’t tell you how it works, but I can tell you that it definitely does. These two treatments have helped me to loosen up significantly and regain mobility. The podiatrists have also designed some custom insoles for me to use. 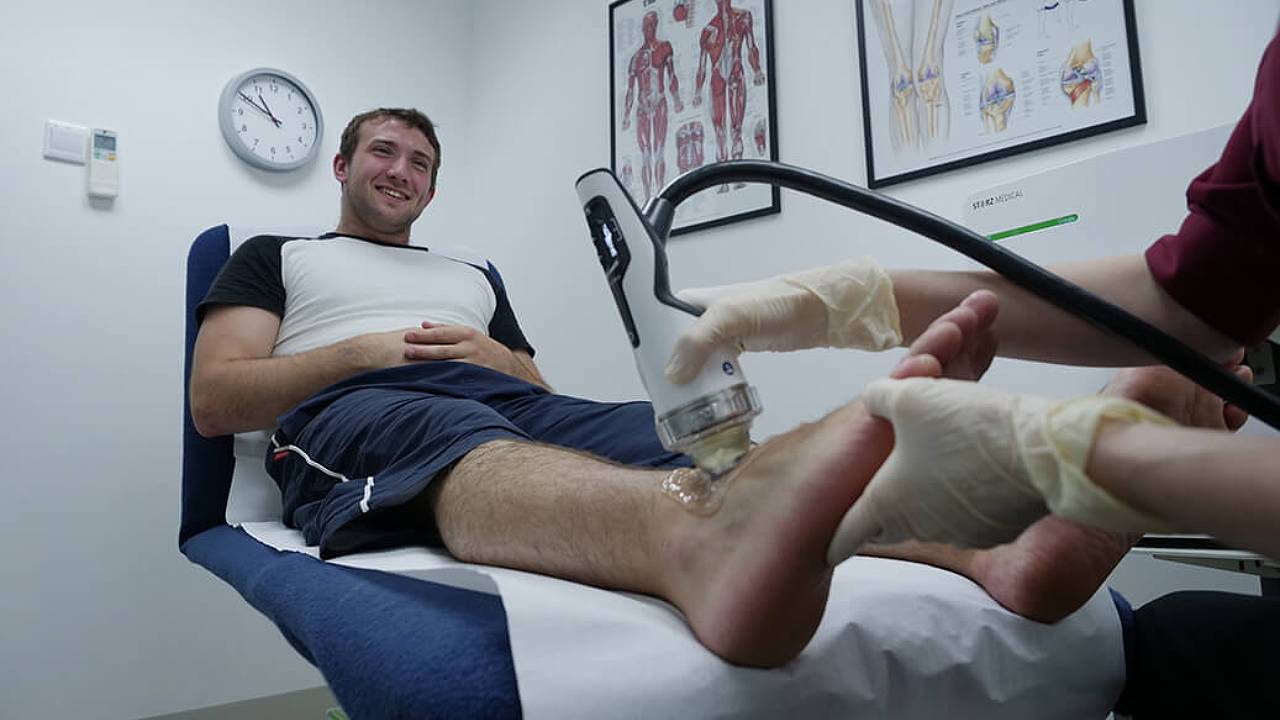 Will you continue pole dancing in the forces?

Definitely, it has helped me improved my core strength, and I daresay even more so than my Army training has. I have also found it useful in the field at times, it allows me to move past obstacles or accomplish certain tasks that others will have difficulties with.

Like I said earlier, although sometimes my army mates make fun of me or of the sport, they always change their minds after watching me breeze past them on the obstacle course. [Smiles]