Home About Us Our Podiatrist Team Georgina Tay 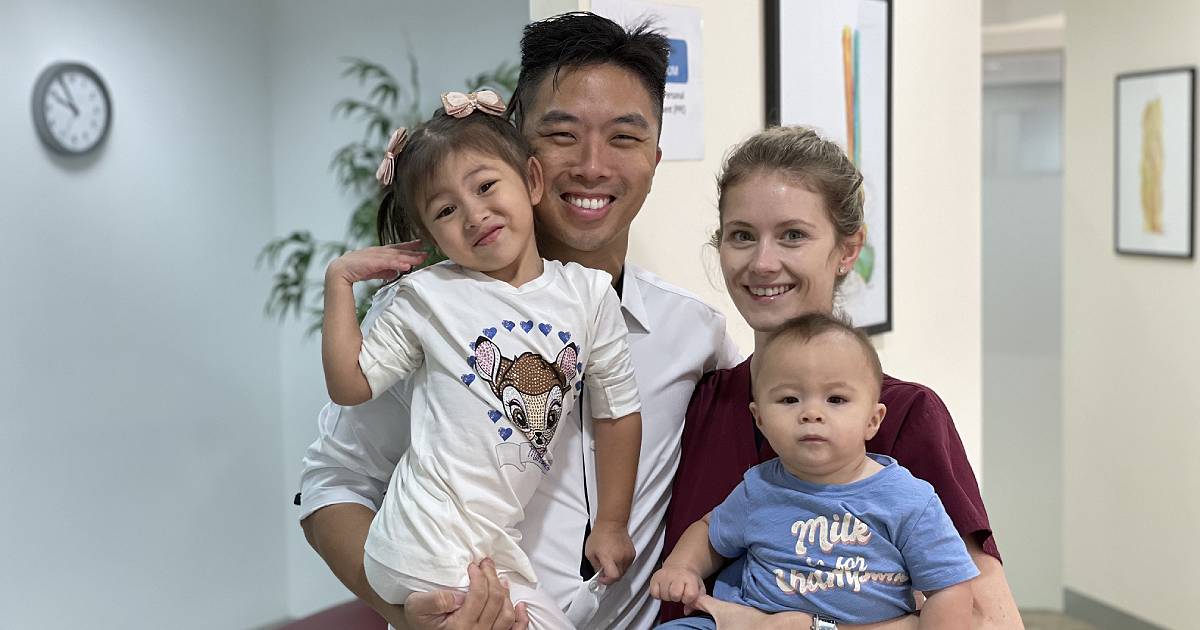 Mrs. Georgina Callaghan-Tay, a British Podiatrist based in Singapore, is the co-founder of the practice and currently serves as the Head of Podiatry Department at East Coast Podiatry. She is a licensed and registered member of the UK Health and Care Professions Council (HCPC).

After graduating with honours in Podiatric Medicine from The University of Salford, U.K., she began her initial years of practice in Singapore by serving in Singapore General Hospital (SGH). This was followed by a stint at National Health Group Polyclinics (NHGP) before going into private practice to co-found East Coast Podiatry.

Georgina focuses her practice on high intensity conservative treatments that have been widely received as a new gold standard in the community. Having been trained and certified in medical shockwave applications by the International Society of Medical Shockwave Treatments, Georgina is adept at utilizing Shockwave therapy to treat an array of conditions. One approach that Georgina takes to treating bone-related issues is to stimulate bone healing through Shockwave therapy. Georgina also incorporates more advanced applications of defocused Shockwave to stimulate healing of chronic diabetic wounds. She consults patients from all over the world who travel to Singapore for clinical advice and treatment at East Coast Podiatry.

As a mother of two children herself, Georgina is a natural with paediatric cases and treats young patients as she would her own. With a keen interest in paediatric care, Georgina and the team are specialised in casting for clubfoot conditions and correcting early paediatric walking issues. Using a combination of therapies, she focuses on preventing paediatric injuries, growing and overuse pains. Georgina is a firm believer in early intervention, especially when it comes to paediatric conditions, and has reinforced this in her daily practice.

Alongside her affinity for paediatric cases, Georgina has extensive experience in treating all generalised lower limb conditions including arthritis, forefoot pain and chronic musculoskeletal pains, in both the young and elderly. Patients at risk of amputation often seek out Georgina and the team at East Coast Podiatry as they are collectively known for healing even the most chronic of wounds by using comprehensive and advanced treatment approaches. Georgina also treats overly complex cases, such as drop foot, walking issues stemming from congenital abnormalities, neurological deficit, and those with special needs.

Georgina continues to contribute to the profession through workshops, community events, and publishing articles and videos to increase public awareness and education about lower limb conditions. Having won multiple awards and recognitions during her service period in the public sector, Georgina has continued her community work in private practice by leading her team to participate in pro-bono screenings for students in schools and the less fortunate.

“Children’s feet are mostly formed of cartilage at 0-2 years old. This makes them small and malleable for intervention. As the child grows, the structures in the foot develop and become less flexible. This makes it harder to treat certain conditions, such as flat foot, in-toeing or out-toeing. I firmly believe that early intervention is key to any issues with the foot, ankle, or body. If you see a problem developing, you should not try to let the problem resolve itself or wait and see, but go and get it fixed. The earlier a problem is addressed, the higher the success rate of treatment and healing.”

“After I became a mother, I came across a quote, ‘the human body can create a baby in 9 months and within a year be back to almost normal but sprain your ankle once and it will never feel the same’, and found it to be exceedingly true. Once you have suffered from a sprain, the likelihood of subsequent sprains increases dramatically. This means that restabilising the ankle is critical for preventing recurrent sprains. You can avoid the need for surgical intervention and enjoy a full range of motion.”

“All pain should be investigated and treated if it interferes with your daily life or worsens over time. Neglecting the issue doesn’t make it go away, but allows it to progress, warranting for more aggressive and complex treatments later on. If neglected for a sufficient period of time, surgical intervention may be the only option. As a podiatrist, my approach is to address conditions as soon as possible, allowing the patient to maintain their lifestyle unchanged. Sometimes these pains and discomforts are a sign of more serious chronic conditions, such as diabetes or cancer, so assessment and treatment should not be delayed or ignored.”

Fast Facts About Customised Insoles
Customised Foot Orthotics are medical devices designed for an individual’s specific walking or postural needs. These devices are used to facilitate correct foot function and can be divided into two general categories, functional and accommodative.

Functional Orthotics are used to support and correct the foot or other parts of the lower limb in order to facilitate ideal gait patterns, making them suitable for treating conditions such as ankle pain or bursitis.

Accommodative Orthotics focus on providing cushioning for an area of injury, and are used in the treatment of conditions such as diabetic foot ulcers and Charcot foot.

Fast Facts About Hypermobility
Hypermobility is a common condition where the a person’s joints are able to move easily beyond the medically accepted normal range. Hypermobility is more common in children, and is referred to as double-jointed, ligamentous laxity, or loose joints.

Hypermobility is often inherited and can lead to painful joints across the body due to excessive range of motion during activities. This condition also often leads to increased incidences of sprains and injuries, especially in the lower limbs. More extreme cases of hypermobility are Ehlers-Danlos Syndrome, Down Syndrome and Marfan Syndrome.

What can podiatrists do for babies?
Even at a young age, children can show signs of abnormal lower limb developments. As a result, it is crucial for parents to educate themselves on the signs and consult a podiatrist before the condition has time to worsen.

Children may be unable to or unreliable when it comes to mentioning their discomfort, so parents need to be vigilant about their child’s health. Some of the foot conditions common in children include pigeon-toeing, knock knees, and toe-walking. 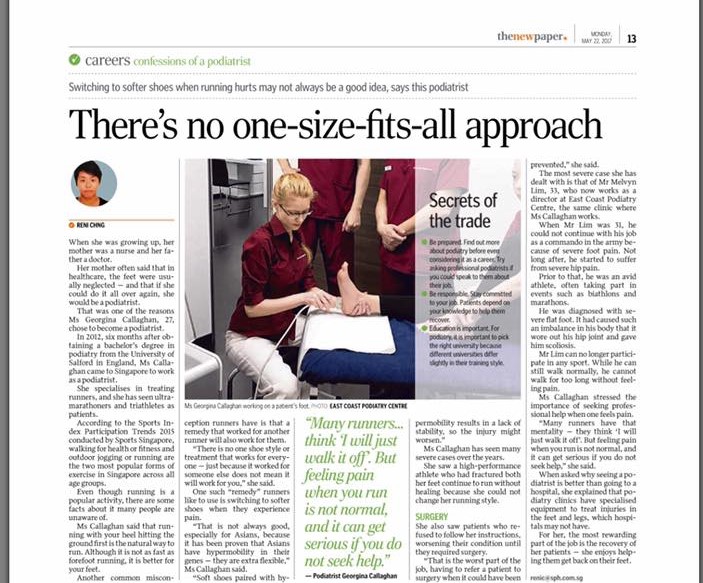 In this interview with The New Paper, Georgina talks about the importance of adhering to your podiatrist’s instructions as well as what podiatrists are expected to do and what sort of treatments you might expect as a patient.

It is critically important to follow your podiatrist’s instructions as failing to do so can cause your treatment plan to be less effective or even worsen your condition.

Georgina is an amazing podiatrist. She has helped me with toenail fungal infection and provided me with a bunch of advices related to my feet. Highly recommend!
T

Extremely friendly, professional and talented team of people. Special thanks to Georgina for her ongoing support and advise on my ankle problem.
R

Georgina was very helpful. We came all the way from Sri Lanka for our podiatry.
Q

Good service throughout, from appointment setting to post-treatment. Friendly staff and podiatrist with very good experinece. Overall very satisfied
B

I came in for knee pain and my leg was changing colour, which was scary. It didn’t seem to be getting any better and was turning darker instead so I thought it was actually a sign of diabetes! Thankfully, my podiatrist Georgina Tay identified that I had a condition..
More of Georgina Tay's testimonials. View Here